My 3rd great-grandparents, Johann and Marie Peiter, were German immigrants that settled in Marion County, Missouri, just west of Hannibal. They lived in the small town of West Ely, Missouri for about 50 years and were well-loved members of the tight-knit community. Many of their descendants have stayed in the West Ely area, but some of them are now located in the Chicago area.

Johann Heinrich Peiter was born 22 August 1839 in Lintorf, Hannover, Germany. He was the son of Caspar Heinrich Peiter and Marie Elenora Stolte. (His mother passed away in Germany in 1858, but his father Caspar followed him to the USA, where he passed away in 1897.) Johann went to school at Osnabreck, Germany, where he learned the mason’s trade. He married Marie Gertrude Stockhaus when he was 23 years old on 10 May 1863 in Germany. She was born 14 September 1838 in Rabber, Hannover, Germany, and was the daughter of Johann Heinrich Stockhaus and Maria Elisabeth Henrichsmeyer.

Johann and Marie came to the United States shortly after the birth of their first child, Caspar Heinrich Peiter (1865-1937), in 1865. Their next child, Maria Elenore Louisa Peiter (1867-1931), was born in 1867 in Cleveland, Ohio. The family lived for about two years in Cleveland, where Johann worked as a stonemason. In the company of his brother-in-law, Gerhart Stockhaus, he moved his family to Marion County, Missouri, where together they purchased 160 acres. They settled in West Ely, where there was a growing community of German families. The rest of Johann and Marie’s children were born there, including Ernst Heinrich Peiter (1870-1944), Maria Gertrude Peiter (1871-1930), Louise Carolina Peiter (1874-1963), Johannes Ernst Friedrich Peiter (1876-1951), Ferdinand Friederich Gottfried Peiter (1880-1881) and my great-great grandmother, Emma Anna Louise Peiter (1882-1969). (Emma would later marry my great-great grandfather William Wischmeyer.) 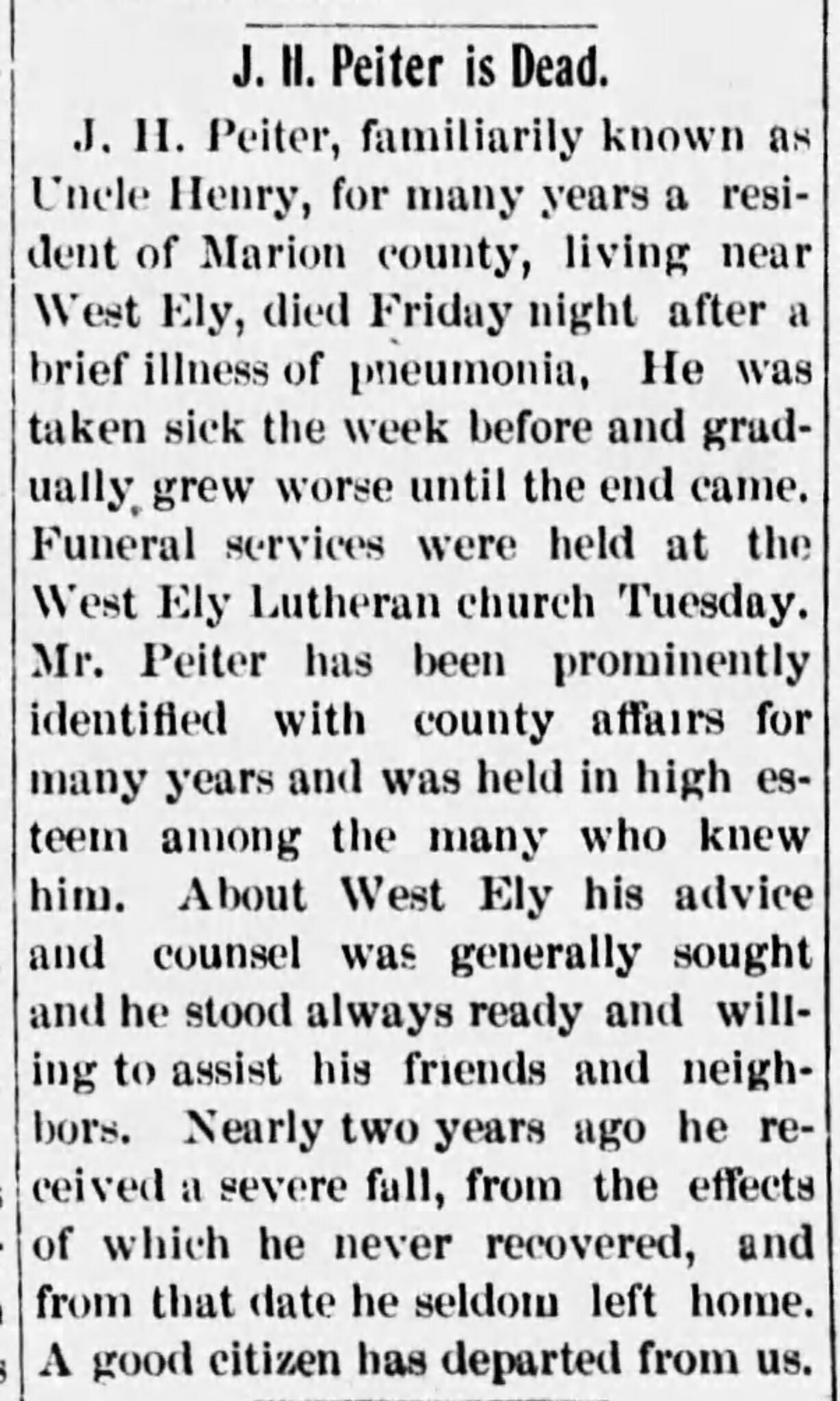 After Johann and Marie made the life-changing move to Missouri, they remained on the same farm in South River Township near West Ely for the remainder of their lives. They were members of the West Ely Evangelical Immanuel Lutheran Church, which was located nearby. He was a prominent member and Elder for over 20 years. Locally, he was known as “Uncle Henry,” (and in local records, he uses the name “John H.” or “Henry.”) He was a postmaster of West Ely for several years, and was a School Trustee of his home district for many years. Except for their daughter Emma, their children remained living in the West Ely or Marion County area for the rest of their lives.

Johann passed away on 12 January 1912. He was 72 years old. In his obituary, he is described as having “been prominently identified with county affairs for many years and was held in high esteem among the many who knew him. About West Ely his advice and counsel was generally sought and he stood always ready and willing to assist his friends and neighbors… A good citizen has departed from us.” Marie passed away a few years later on 5 November 1918 at her home at the age of 80 years old. She is also described as “well known and highly esteemed in the West Ely neighborhood.” They are both buried at West Ely Lutheran Cemetery. 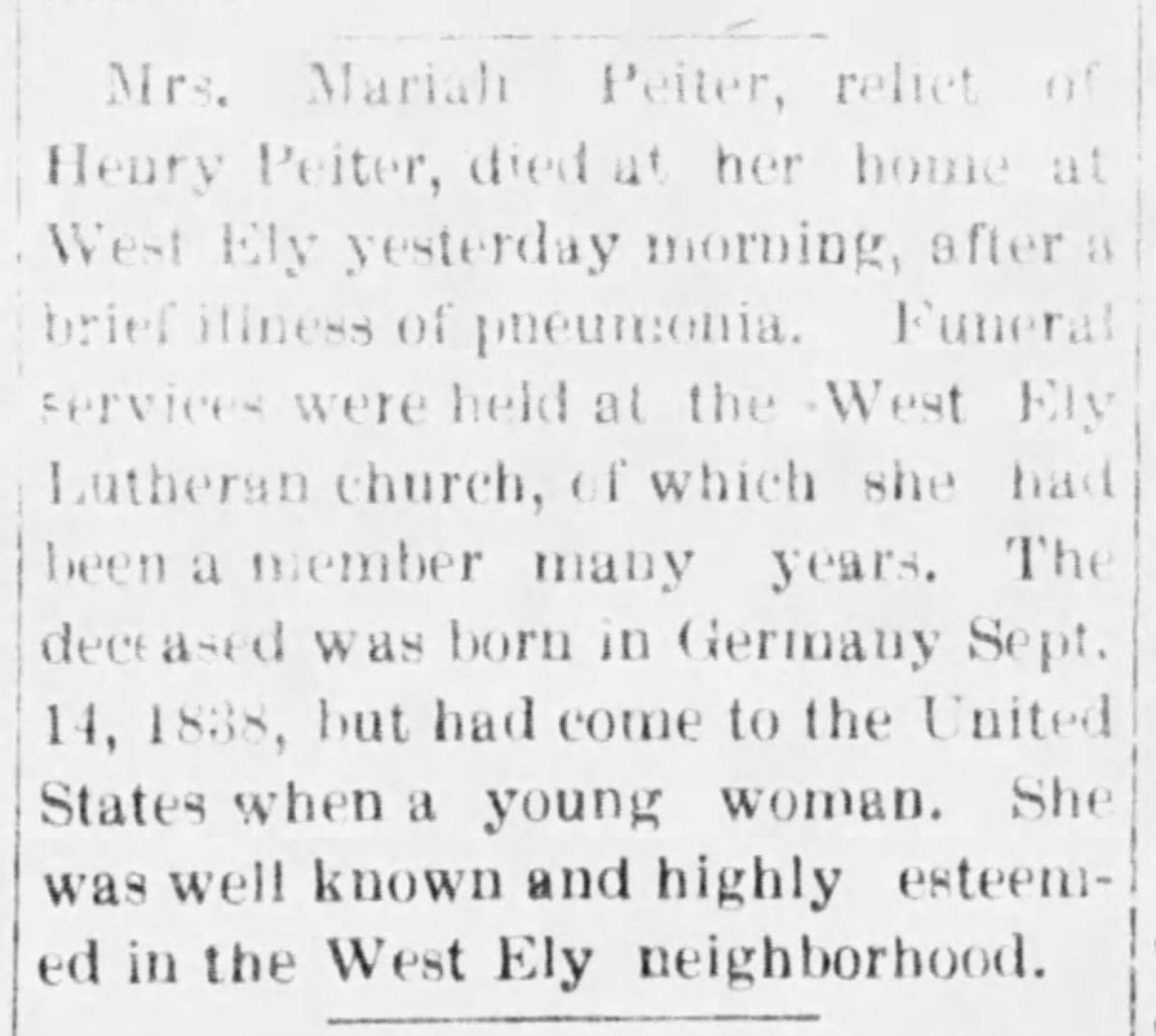