Sometimes you live through history. I am blessed to have witnessed the Cubs winning their first World Series in 108 years. Being a Cubs fan is just in my blood.

When I was growing up, we’d try to go to a Cubs game once a year. As a kid, Chicago seemed very far away, and traveling to a Cubs game seemed like such a trip. Most of these trips were organized by a local bank, who sold tickets to its members and would take us to the game on a big fancy Cubs bus. We’d usually sit on the third base side, under the balcony so we were protected from the sun and the rain. My grandfather (Papa) would buy tickets for the whole family, and we’d spend the day at Wrigley. I’ll never forget sitting next to Papa during the game while he explained who everyone was on the team, and gave us some light commentary.

The rest of the season, Papa would often listen to the Cubs games on WGN while he worked. He’d always know the score of the day’s game, and could tell me all the stats if I asked. In his own quiet way, he loved the Cubs, and loved to see them win. He remembered the last time they were in the World Series in 1945. He played baseball on a community team about that same time. I’d imagine that he listened to those games intently on the radio with his brother and dad, or gathered at a teammate’s house to cheer them on.

The love for the Cubs runs deep on my dad’s side of the family too. My grandmother’s side of the family lived on the North side for several generations, and her uncle Ed lived within blocks of Wrigley Field. Great-Uncle Ed and Great-Aunt Edna were like grandparents to my dad, and he loved to go and visit them. Some of my dad’s earliest memories are visiting them over summer breaks and holidays, and of Wrigley Field. Uncle Ed and his son Jim were devoted fans who hardly missed watching or listening to a game. They’d watch the home games on WGN every afternoon and absolutely loved Jack Brickhouse and Lou Boudreau, and respected humble players like Ryne Sandberg, Ernie Banks, Ron Santo, and others who were happy just to play the game.

Going to a Cubs game was probably the best part of the summer for my dad when he was growing up. They would get General Grandstand seats, usually just off center of home plate. They’d walk to the stadium early, watch the end of batting practice, and then usually waited for the crowd to leave after the game. Probably the best day at the park came when he was about 10 years old. It was a double header day. The first game was something like 18-16 (Cubs win) and the second game was 1-0 Cubs.

Even though the Cubs were not “winners” in the usual sense, they embodied the good things about many people around the country. You loved them because they continued to play well (not great) and were popular. Even in their worst years, they packed the place day after day. Wrigley is a comfortable pleasant place to visit. Most people who cheer for the Cubs are life-long fans. There hasn’t been much to draw the people who cheer only winning teams. So the loyalty is there. For the people who aren’t baseball fans, they probably know someone who is a Cub fan.

The Cubs have certainly made history this year. Many of their fans are devoted, lifelong fans who love their team and their city. Through many years, the Cubs embodied the good things in life, like hope, loyalty and commitment. Even in their worst years, fans turned out to watch the games at “the friendly confines.” Many lifelong fans hoped and prayed for this day, but never got to see it happen. This year many new Cubs fans were born, but I am proud to say that Cubbie Blue runs deep in my blood. I’m so happy to say that I’ve seen this day, and I’ll never forget it. We can finally say again, The Cubs are World Series Champs! Go Cubs Go!

“Hey Chicago, what do ya say, Cubs are gonna win today!”

My sister and I before the World Series game 5 on Sunday, Oct. 30. 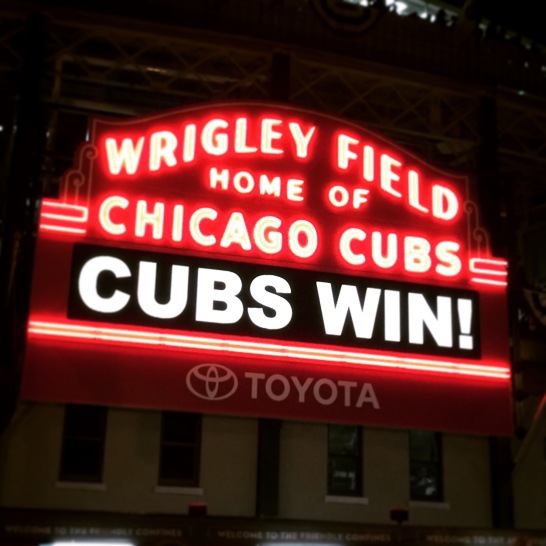 5 thoughts on “Cubbie Blue runs deep in my blood”