During the past few weeks I have been busy working with a genealogical peerage from 16th century Spain, named Nobiliario genealógico de varias casas de España. It is a handwritten manuscript that describes noble families in the Iberian Peninsula, and includes drawings of each family’s coats of arms. Through the years, many people have used it, as evidenced by all of the notes and comments written in the margins! It is currently in safe keeping at the Newberry Library in Chicago. It is such a thrill to be working with such a unique and colorful book!

The art of tracing one’s ancestors is not a new pastime. For many centuries families have kept track of their family histories. Your lineage would have been an important part of your identity. Even religious texts like the Old Testament and the Qur’an contain lineages of important religious figures! Genealogies (or peerages, as this book is called) were recorded in medieval and early modern Europe for a variety of reasons, but typically only for families from the upper classes. In 16th century Spain, it was very important for noble families to know their bloodlines. At that time it was very important to maintain “limpieza de sangre” (“pure blood”), meaning that they did not have any Jewish or Muslim ancestors. Limpieza de sangre was a requirement for most kinds of governmental or religious positions, and you could prove your lineage using documents like this one.

For my final paper for my History of the Book class, I am learning everything that I can about this manuscript- how it was used, where it came from, who used it, and more! Researching this manuscript has been a lot like researching my family tree, but instead of trying to follow one ancestor through his life, I’m trying to trace this manuscript’s 400 year life! Instead of researching when an ancestor was born, where he lived, who was his family, and what he did for a living, I’m trying to figure out when it was written, who owned it, if it has any siblings, and how it was used! It has been a real mystery, and I’m on my way to finding many answers! I will share with you later what I find out! In the meantime, I wanted to share some images with you from the book! (Click on an image to enlarge it and read the caption.)

The script is just beautiful. This is the first page of the book. It’s missing all of the introduction pages. 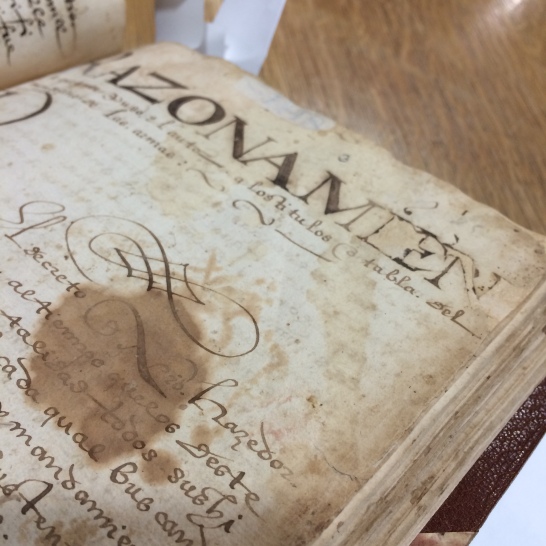 The real first page is the only part of the introduction that hasn’t been lost. It was placed after folio 24! Notice how stained and worn it is. Part of the ink in the title has also eaten through the paper! 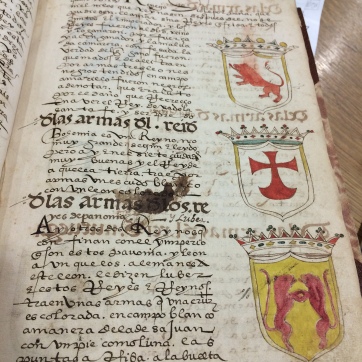 The coats of arms for the royal families of Frisa, Bohemia and Panonia with a short description of each one.

This manuscript gives descriptions of each family, including a description of their coat of arms (armas). 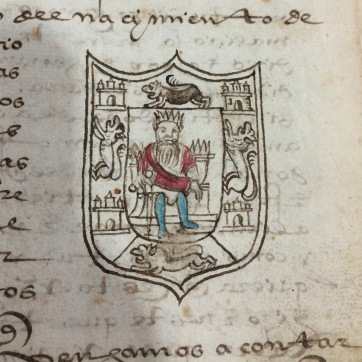 Some coats of arms are pretty detailed, but not always fully colored! 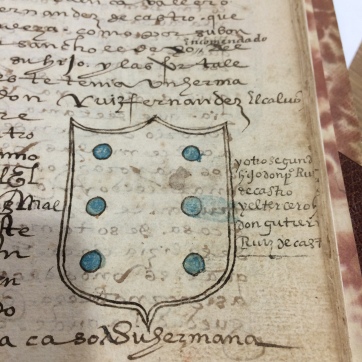 There are at least two or more people who used this book and wrote notes in the margins. Usually it was to correct or clarify a piece of information in the text.

The detailed coat of arms for the Barrientos family. 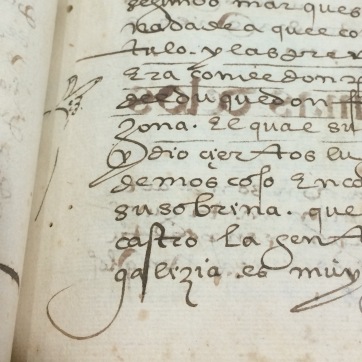 Sometimes one of the users would draw a little hand (called a manicule) to point at important passages!

3 thoughts on “Genealogy through the ages”