“Women who stepped up were measured as citizens of the nation, not as women… This was a people’s war and everyone was in it.” – Oveta Culp Hobby (as quoted on the World War II memorial in Washington, D.C.)

World War II was the first time in American history that women were allowed to enlist in the military. Even today, these groundbreaking women remain on the sidelines of WWII history and many of their stories have been forgotten. Few of these women faced enemy fire or had the opportunity to serve overseas, but they were heroic nevertheless. When it was not expected of them, they left their homes and their families to serve their country. They served as essential behind-the-scenes members of the military, serving as officers, recruiters, clerks, storekeepers, control tower operators, nurses, pharmacists, and more. Women could enlist in special reserve units of the military starting in 1942, including the Women’s Army Auxiliary Corps (WAAC, dropping the “Auxiliary” in 1943 to become WAC), United States Naval Reserve WAVES (Women Accepted for Volunteer Emergency Service), Marine Corps Women’s Reserve, Coast Guard SPARS, and Air Force WASPS (Women Airforce Service Pilots). The Army Nurse Corps (ANC) was established in 1901 and the Navy Nurse Corps in 1908, but these women were not considered part of the Army or Navy until later, when they were given retroactive veteran status. The approximately 350,000 women nationwide who enlisted in these reserves “released a man to fight” overseas. Whether they enlisted out of patriotic duty, sense of adventure, or another reason, they became an essential part of the military. END_OF_DOCUMENT_TOKEN_TO_BE_REPLACED

Today I’m remembering my Nana, who was born 96 years ago today. END_OF_DOCUMENT_TOKEN_TO_BE_REPLACED

Happy Independence Day, America! Although this photo was probably not taken on the 4th of July, these children are certainly in a patriotic mood! This postcard was produced between 1915-1920, and shows a parade on Lincoln Highway during an unknown event (possibly Decoration Day?). The Daily Chronicle building, which still stands on the north side of Lincoln Highway near First Street in downtown DeKalb, can be seen in the background. 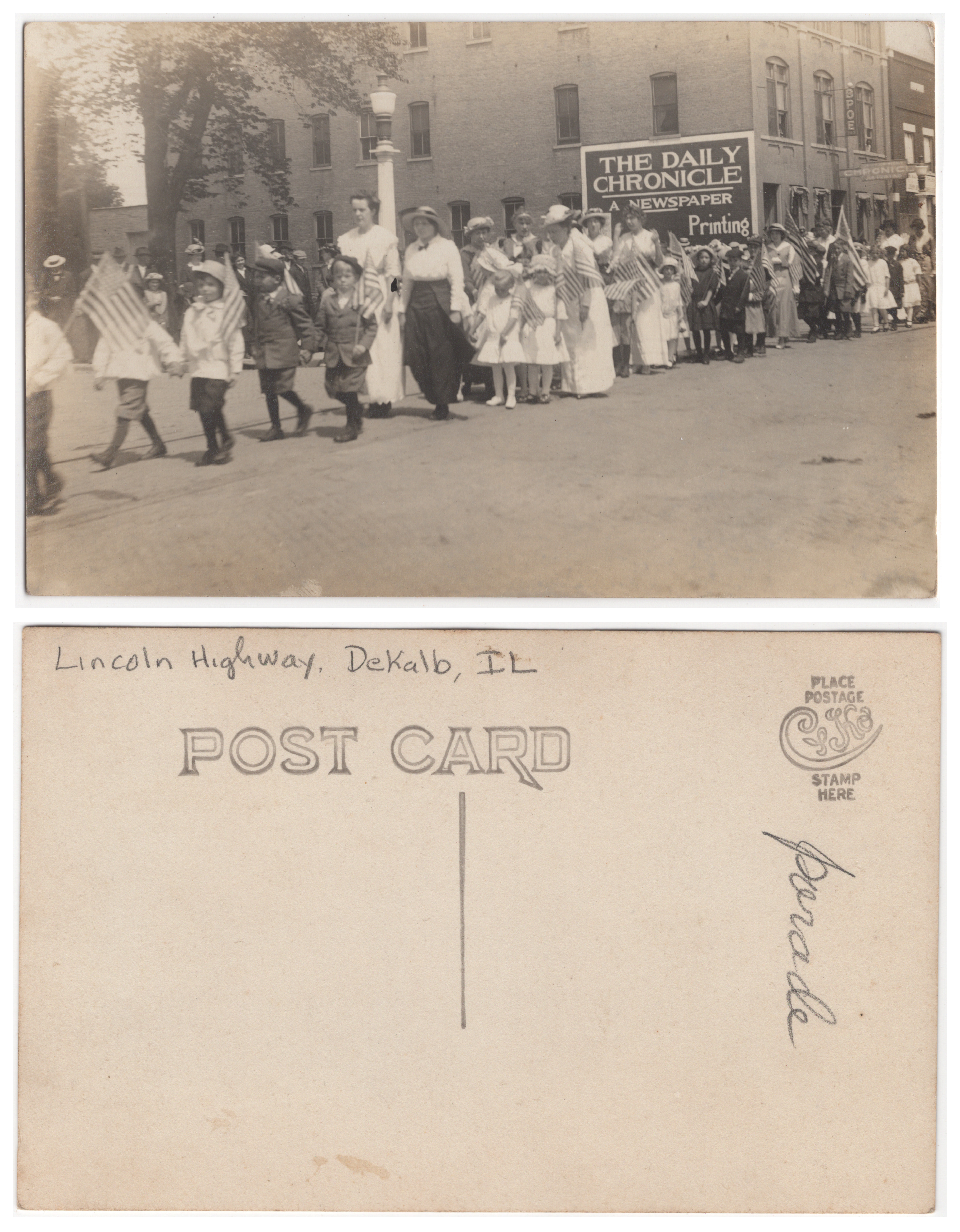 (This scanned postcard is part of my growing collection of postcards from DeKalb County, IL. See the start of my digital collection here.)

EDIT: this post was updated to reflect a more accurate date for this postcard. Although Cyko postcards of this type were usually produced between 1903-1905, a building in the background of the photo was not completed until late June 1915, so the photos could not have been taken before that date.

I was named for two very special women in my mom’s life. One of them was Mrs. Eva Busch, who was like a grandmother to my mom when she was young. She lived right around the corner when my mom was growing up, and would often watch her while her parents were at work. Mrs. Busch had been good friends with my mom’s Grandma Kaiser, and although she sometimes took care of other children in the neighborhood, she had a special bond with my mom. My mom would spend time at her house after school and during the summer when her parents were at work. They spent many of their days baking pies, cookies, or bread. One of her specialties was Hickory Nut Cake. In the fall, they would gather nuts from the Hickory trees in their yards, and they would spend many hours cracking them and separating the nuts from the shells. After all that hard work, the cake was quite a treat! On warm days, my mom enjoyed reading a book underneath the large white bridal wreath bush in front of her house. Mrs. Busch’s garden also always had colorful snapdragons, and she would show my mom how to pinch the flowers to make the “dragons” snap open their “mouths.” On cold or rainy days, Mrs. Busch taught my mom how to play solitaire or other card games. Mrs. Busch passed away when my mom was in college. Although my mom always called her Mrs. Busch, she thought her first name, Eva, was a pretty name, and when I was born, she paired it with my aunt’s middle name, Anne, to make my first name. Mrs. Busch and my aunt were very kind, patient, and practical women, and were talented bakers. I’m hoping to live up to my name!

About 1,000 men from DeKalb County, Illinois, answered the call to serve their country between 1917-1919 during World War I. About 65 of them died during the war and never made it back home. The following pages are from “An Honor Roll, containing a pictorial record of the gallant and courageous men from DeKalb County, Illinois, U.S.A., who served in the Great War 1917 – 1918 – 1919,” published by the DeKalb Chronicle Publishing Company shortly after the conclusion of the war. These men are among the “gallant and courageous men” who did not make it home. They had earned their families a “Gold Star,” which was a designation that started in WWI, and denoted that the family had lost a loved one in combat. This was a visual symbol to the community that the family had lost a loved one in the war. (Learn more about the Gold Stars tradition here.) This Memorial Day, I’d like to remember the service of these men who made the ultimate sacrifice during World War I. END_OF_DOCUMENT_TOKEN_TO_BE_REPLACED