In a previous post, I described my search for my great-grandfather’s brother Conrad August Weil. I have recently returned from my brief research trip to Pittsburgh, and I wanted to share some exciting findings!

When I went to Pittsburgh, one of my primary goals was to find out of the Conrad Weil who married Evelyn Simon was the same Conrad Weil Jr. from my family. The short answer is, yes, he is! My next question was, where did he go after that? (I still don’t know!)

On my first day in Pittsburgh, I went to the main library of Carnegie Library of Pittsburgh to start looking through some microfilm. I wasn’t sure when Conrad and Evelyn got married, but I knew it was likely sometime between 1911 and 1915. I located their marriage in the Allegheny County Marriage Index! They were married in 1915!

I’ve attached two pages from their marriage license packet, which include their license, and Conrad’s petition for guardianship over himself. The guardianship petition states that Conrad is the minor child of “Conrad Weil and Louisa Weil, who resided in Pittsburg, Allegheny County, Pa. until the death of Mrs. Weil – when two years subsequently, the father left Allegheny County – above the age of fourteen years, and has no guardian for his person; that his mother has been dead some seventeen years and his father left Allegheny County some fifteen years ago and his whereabouts is unknown to the petitioner, that his mother left no estate, his father has contributed nothing to his support; that he lived some twelve years in the Concordia Orphans Home, Butler County until about four years ago when he came back to Allegheny County…”

His father did, in fact, pay for Conrad Jr.’s support at the Orphans Home, but perhaps he didn’t pay regularly, or Conrad Jr. didn’t know about the payments that his father was supposed to make for their stay. Conrad Jr. did leave the Orphans’ Home in 1911, and I supposed that he was a hired man for Tom Hiller of Allison Park at that time. In 1915, he was living at the home of Henry Frederick in Pittsburgh, who consented to the marriage. At the time of their marriage, Conrad was a warehouseman.

Conrad Jr. and Evelyn Weil had a daughter, Marie Cathryn Weil, on 13 July 1915, just two months after they married. Marie’s photo appeared in the newspaper when she was two years old (right). It appears that Evelyn raised Marie on her own. Marie and her mother lived with Evelyn’s parents in Hampton in 1920 and 1930. Marie married Charles E. Heidenrich, and passed away in March 1933 from Lobar pneumonia. She was 17 years old when she died, so I assume that she married Charles just before her death. When I was in Pittsburgh I didn’t have a chance to locate their marriage license or other information. There is still no trace of Conrad after 1915. What happened to him? Did he abandon his wife and child? Did he ever meet his child, and was he a part of her life? Did he join the military and didn’t come back? Or did he live somewhere else for a job and send money back home? Or did something else happen to him? The search for him continues!

The other goal of my trip was to locate the graves of the parents of my great-great grandparents Conrad and Louisa Weil. They died 34 years apart, and were buried at different cemeteries. I was fairly certain that neither of them had headstones, but I wanted to see for myself. I first visited Minersville Cemetery in Pittsburgh, where Louisa and their infant son Wilhelm is buried. According to Louisa’s burial record in 1898, she is buried in “Reihe.” I was unable to identify which section this was, but with the help of a librarian at the Carnegie Library, we suspect that this section is the single graves at the front of the cemetery. I spent an afternoon in this cemetery, but I was unable to locate a headstone for her. I photographed the area where she is likely buried.

The next day, I visited St. Anne’s Cemetery in Castle Shannon, where Conrad Weil Sr. is buried. He had been living in Castle Shannon with his son Charles when he passed away. As they were coal miners, and had little extra money, I suspected that Conrad Sr. also didn’t have a headstone. I had information that he was buried in the unconsecrated area of this Catholic Cemetery, since he wasn’t a practicing Catholic. He was actually a Lutheran, but his son Charles was married to a Catholic, so the rest of the family were likely Catholic. I spent some time in this cemetery as well, and was unable to locate a headstone for Conrad. I did enjoy the views from this beautiful hilltop cemetery.

I was also able to visit the two churches that Conrad and Louisa attended while living in Pittsburgh. They were married at the church at 620 Smithfield Ave., formerly called Smithfield Evangelical Lutheran Church. Their children Wilhelm, Carl, George, and Marie were baptized at this church. I took a photo of the “new” building, built in 1925. The family later attended Second St. Paul’s Lutheran Church. They became members of that church in 1894. Their children Conrad Jr. and Anna Louisa were baptized here.

Many thanks to my husband, who accompanied me on this trip and listened to all my exciting findings every night, and the wonderful librarians at the Pennsylvania Department at the Carnegie Library of Pittsburgh Main Library, who assisted in my search for the burial location of Louisa at Minersville Cemetery! 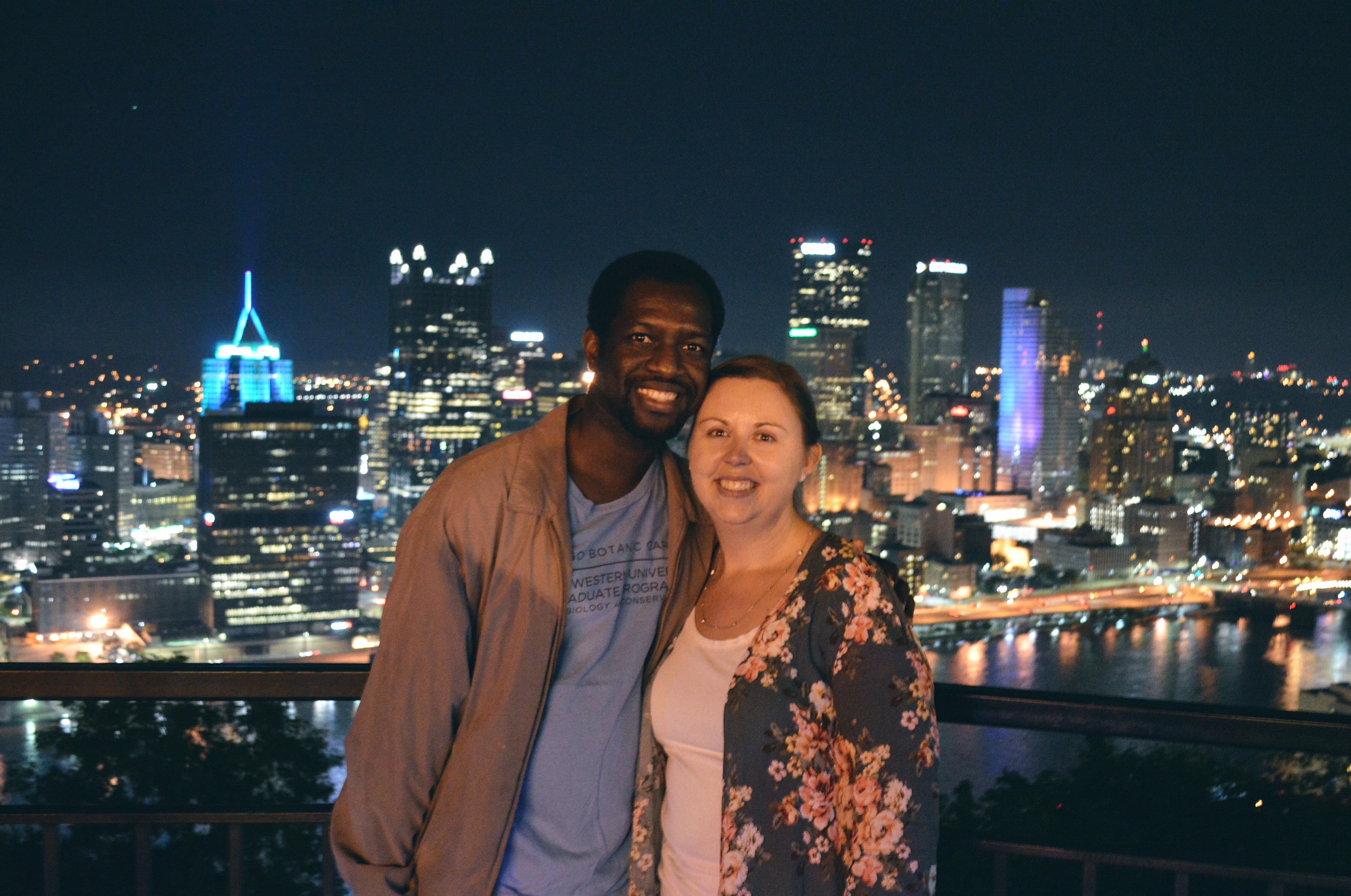 3 thoughts on “Where is Conrad August? (an update)”